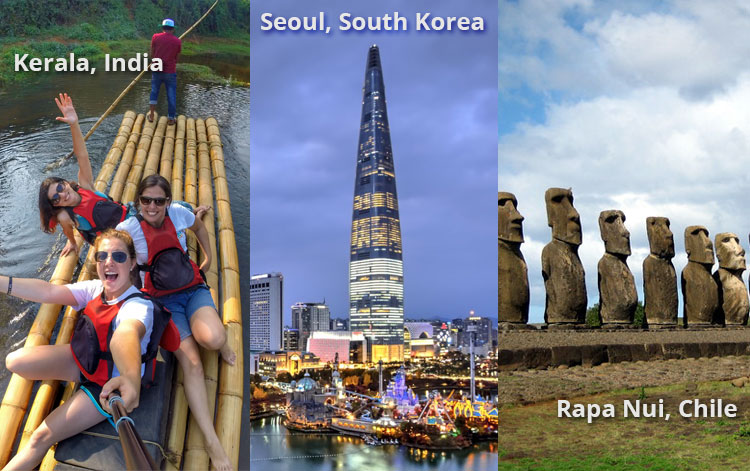 On the southwest coast of India, Kerala is one of India’s most beautiful states. With spectacular beaches and lush backwaters, temples, and palaces, it’s known as “God’s own country” for good reason. Kerala is selected among TIME Magazines’s list of world’s greatest places of 2022 and its time to plan your Kerala Travel with a reputed tour operator.

As India’s first UNESCO World Heritage City, Ahmedabad boasts both ancient landmarks and contemporary innovations that make it a mecca for cultural tourism, from the serene Gandhi Ashram that sits on 36 acres on the banks of the Sabarmati River to Navratri, a vibrant nine-day celebration (this year from Sept. 26 to Oct. 5) billed as the longest dance festival in the world.

An oasis of luxury and excess, Qatar is replete with remnants of ancient civilizations and desert landscapes juxtaposed with ultra­modern skyscrapers and designer boutiques. This year, Qatar will host the 2022 FIFA World Cup, and Doha has gone all out to meet visitor demand. One hundred hotels are scheduled to open this year: Le Royal Méridien Doha is designed to evoke the Place Vendôme in Paris, the posh Chedi Katara Hotel and Resort sits right on the beach, and the all-suite Fairmont and Raffles Doha coexists with the 80,000-seat flagship stadium in the iconic U-shaped Katara Tower in Lusail

If you build it, they will come” seems to be Park City’s mantra. The charming ski town rose to fame hosting the annual Sundance Film Festival, a star-studded celebs-in-snow-boots event, but is now growing into a major winter and summer destination on par with Aspen.

After a few years of grounded travel, take it up a notch by walking the world’s longest pedestrian suspension bridge, a new sky-high architectural marvel in the Czech Republic.

Seoul is considered one of the world’s leading “smart” cities, and now is the first city government to integrate with the Metaverse, earmarking $3.3 million of South Korea’s $187million investment for the development of a virtual communication ecosystem tentatively called Metaverse Seoul. The Seoul Municipal Government launched it with a virtual NewYear’s Eve event and is rolling out programs for residents throughout the year, with the expectation that Metaverse Seoul will be developed by December. It is also working toward launching a Virtual Tourist Zone, which will allow registered users with VR headsets to view the city’s top attractions, such as the Deoksugung Palace, Gwanghwamun Plaza, and Namdaemun Market.

This year, Australia’s Great Barrier Reef was hit by another mass bleaching. Scientists say the reef isn’t dying, but it also isn’t thriving. With only about 100 of the 3,000 individual reefs actively monitored, there’s still much to learn.

Nearly 10 years after Detroit filed for bankruptcy, travelers can now play a role in the city’s vibrant economic recovery by simply driving through. Detroit was recently selected as home of the USA’s first electric-vehicle charging road, solidifying its title once again as the Motor City—but for the modern age.

This picturesque coastal region of southwest England is known more for its heritage coastline and rugged landscapes than food and drink, but that’s changing. In June, Sandridge Barton, home of Sharpham Wine, opened its visitor center and winery, where guests can learn about (and sample) the vineyard’s offerings, taste cheeses from the dairy, and buy gifts to take home. Or book a table at Circa, a new restaurant on the property.

Bali is bringing the heat this year with numerous openings, including the kind of big-ticket luxury resorts and wellness experiences that make it the ideal escape for those looking to reconnect with nature and themselves.

The most rarefied bed-and-­breakfast ever built is located not very far from you—just 250 miles away. The trick is, it’s 250 miles straight up. The not-so-­little inn is the International Space Station, which over the course of its 24-year life has hosted a handful of tourists paying upward of $20 million per seat to fly aboard a Russian Soyuz spacecraft.

Japan’s third largest and most southwesterly island, Kyushu, was the early center of Japanese civilization—much of the nation’s rich history and mythology originated there. The island is known as the Land of Fire, thanks to the smoldering volcano Sakura­jima and the rejuvenating hot springs of Beppu.

The storied island of Rapa Nui finally reopens to tourists after more than two years on Aug. 1. Famous for the iconic massive and mysterious Moai sculptures crafted by its first inhabitants, Rapa Nui, located roughly halfway between Santiago and Tahiti, has been part of Chile since 1888. First inhabited by Polynesians an estimated 1,200 years ago, it was visited during Easter 1722 by Dutch explorers who named the island Paaseiland, translated as Easter Island. Descendants of the island’s first peoples call it both Rapa Nui and Te Pito o Te Henua, meaning “the navel of the world.”

Known for its stunning scenery, ­vibrant culture, and award-­winning wines, the northwestern Argentine province of Salta welcomes visitors this year with new (and ancient) experiences guaranteed to warm the soul and calm the body.

It had become known as “Paradise Lost,” or a “cesspool,” as former Philippine President Rodrigo Duterte described it, after it was tainted by sewage. The once brilliant white sand and clear waters of Boracay Island were choking on the trash and traffic that comes from 2 million annual visitors. It reached a nadir in 2018, when Duterte closed down all tourism on the island for six months—an emergency Band-Aid for decades of ecological abuse.

Madeira may have originally been known for its namesake fortified wine, which is still aged in handmade oak barrels and sometimes made with foot-stomped grapes, but this underexplored Portuguese island off the coast of Morocco is also an adventure lover’s dream. The island is resplendent with natural wonders to explore, with opportunities for hiking, kayaking, climbing, and diving. Take in the sunrise from the top of Pico Ruivo, Madeira’s highest peak, or visit a water­fall along one of the island’s nature-­filled levada walks, footpaths adjacent to irrigation channels dating from the 15th century.

The Isle of Skye has a stunning Scottish landscape characterized by coastal cliffs, craggy hills, and medieval castles, and its capital of Portree (pop. 2,300) is just as inviting as it is rugged. For generations, city-weary Glaswegians have been escaping here on weekends, drawn by idyllic scenery and relative proximity. Now it’s casting a wider net, welcoming a post­pandemic influx of American visitors.