This sight must be seen at least once; The world’s largest stone Buddha statue! 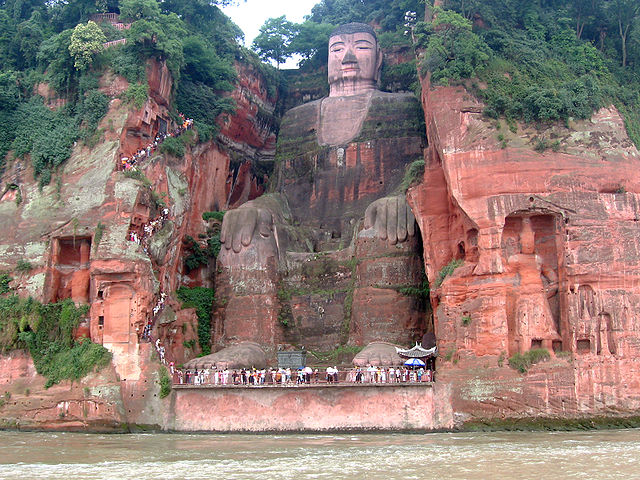 The Leshan Giant Buddha is a 71-meter (233 ft) tall stone statue, built between 713 and 803 (during the Tang dynasty). It is carved out of a cliff face of Cretaceous red bed sandstones that lies at the confluence of the Min River and Dadu River in the southern part of Sichuan province in China, near the city of Leshan. The stone sculpture faces Mount Emei, with the rivers flowing below its feet. It is the largest and tallest stone Buddha statue in the world and it is by far the tallest pre-modern statue in the world.

The Mount Emei Scenic Area, including Leshan Giant Buddha Scenic Area, has been listed as a UNESCO World Heritage Site since 1996.

The most convenient way to get to the Giant Buddha from Leshan Town is through the local bus 13. Upon arrival, it is necessary to purchase a ticket at the price of CNY 90 per person (including Wulong Temple & Mahao Cliff Tomb). The opening hours are 7:30am-6:30pm from April until October and 8:00am-5:30pm from October until March. The weekends and holidays are much busier compared to weekdays.

Apart from the main attraction, there are dozens of pathways throughout the mountain that can be explored by foot.

People come from all over the world to worship Maitreya. To get a close-up view of him, there is a pedestrian pathway that allows visitors to appreciate the changing view of Buddha’s body through multiple perspectives. It is important to note that the plank pathways there are steep and narrow. To get a more panoramic view of him, there are sightseeing boats available at the price of CNY 70 per person. Since these boats have a capacity of 35 passengers, there may be a waiting line.