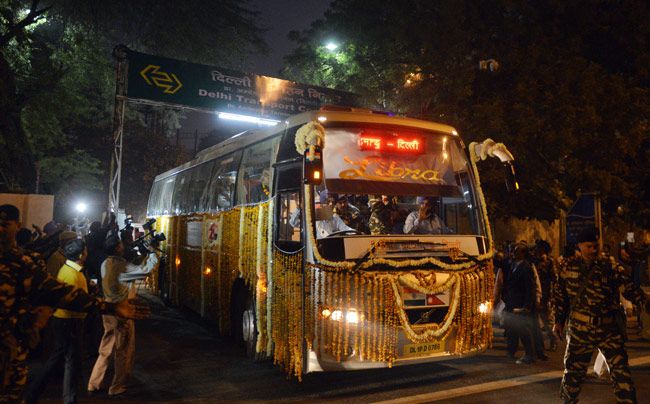 The Delhi-Kathmandu bus service, suspended for over one and half years due to the COVID-19 pandemic, will resume from December 15, Transport officials said on Tuesday.

A notification issued on Monday by the Delhi Transport Corporation(DTC)stated that the Delhi-Kathmandu bus will operate from Ambedkar Bus Terminal at 10 AM on December 15, said DTC Deputy Chief General Manager (PR) RS Minhas.

The DTC has tied up with Skyline India (Motors) Pvt Ltd for operation of the bus.

“The latest COVID-19 protocols/guidelines issued by the Ministry of Home Affairs (MHA) are to be followed in true spirit in all conditions,” the notification read.

The bus service, connecting the capital cities of India and Nepal, was launched in November 2014. The operation was shut down on March 23, 2020 amid first wave of the pandemic.

It will be “mandatory” for all the passengers to carry certificate of both doses of Covid vaccine and a negative RT-PCR test report within 72 hours of start of the journey, a senior DTC official said.

The passengers will not be allowed to board the bus if they fail to produce the documents, he said.

The bus service covers a distance of 1,167 Km between Delhi and Kathmandu with stoppages at Firozabad, Faizabad in Uttar Pradesh and Mugling (Nepal). Earlier, the fare of the journey cost over Rs 2,300 which has now been increased to around Rs 2,800, a DTC official said.

The bus will also stop at Sonauli (India-Nepal border) for customs checking. Passengers travelling between Delhi and Kathmandu are not allowed to disembark or embark enroute except at the scheduled halts.

The Maitri Bus Sewa was initiated as a symbol of friendship between India and Nepal and since its beginning, the buses have frequently carried pilgrims, tourists, foreign delegates and the general public from both the nations.

However, there is no development on the other international bus service of DTC between Delhi and Lahore, officials said.