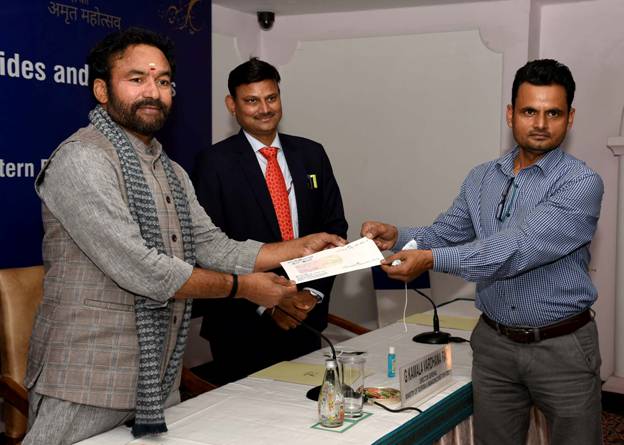 Union Minister for Tourism, Culture &DoNER, Shri G.Kishan Reddy handed over  cheques/ sanction letters to the first lot of stakeholders who have been granted the loan/ in-principle approval under the LGSCATSS at an event today in New Delhi. Secretary Tourism Shri Arvind Singh, DG Tourism Shri G Kamala Vardhana Rao, ADG Tourism Smt. Rupinder Brar and senior officers from the Ministry of Tourism and the participating banks were also present in the event.

Later, the Union Minister addressed the gathering and acknowledged the efforts of stakeholders of the travel trade sector, senior officers from the Ministry and the Banks and granted the loan / in-principle approval for loan under the Loan Guarantee Scheme for COVID Affected Tourism Sector Services (LGSCATSS). The Minister acknowledged that the Tourism sector was one of the most affected service sectors and those dependent on the tourism sector faced a significant depletion in incomes.

Shri G kishan Reddy said, “The Prime Minister Sri Narendra Modi desired that sectors such as Tourism be extended financial support so that Tour Operators, Travel Agents, Tourist Transport Operators, Regional level Tourist and the local guides can sustain themselves in the time of change”

LGSCATSS provides support to approved Tour Operators, Travel Agents, Tourist Transport Operators, Regional level Tourist and local guides by the State governments and Union Territories in the form of credit under the Credit Guarantee Scheme at concessional rates. The purpose of extending financial support/relief to the tourism stakeholders and service providers was to mitigate their hardships due to the Covid-19 pandemic and to help them revive their business and livelihood.

The Union Minister said  “currently there is a discussion on the impact of the third wave, but I believe that strict adherence to COVID protocol will help overcome the situation. I urge the citizens of the country to strictly follow the Covid protocol to stay safe and healthy”. He said that under the leadership of Sri Narendra Modi, the scientists have developed the vaccine indigenously, and the Government has already administered around 125 crore doses. He also recognised the effort of Indian scientists and entrepreneurs and said that it was a proud moment for India as even developed countries are queuing up for India-made vaccines.

The Minister also encouraged families to visit at least two tourism destinations each year and this will help future generations to know about our rich heritage. Various circuits are being developed and connected to make it accessible for tourists. The Minister also stated that the Ministry of Railways is running specialised trains by leveraging skilled professionals to connect the Buddhist destinations and Ramayan circuit.

The Minister also spoke about various initiatives and interventions made during COVID-19 to develop tourism. Around 5 lakh visas will be issued to the foreign tourists without any charges and 170 countries are now a part of the e-visa approval facility. The Government of India has also appointed exclusive officers to promote the country’s tourism in 20 missions abroad in countries such as Canada, United States, United Kingdom, France, Germany, Singapore, Korea, Japan.

The Minister also stated that the Ministry is working with other Ministries to collaborate on various tourist themes such as Wildlife Tourism, cruise and aqua tourism, eco and rural tourism projects. “In a short span with the coordination of various departments and ministries we are working towards the development of the sector”, the Minister added. The Minister also stated that the Northeast region is unexplored and has a great potential for tourism, tourists from the various parts of the country and world should explore the beautiful destinations.

The operators in the tourism sector and also prospective investors can have confidence in the country’s potential growth of the sector, the Minister added.