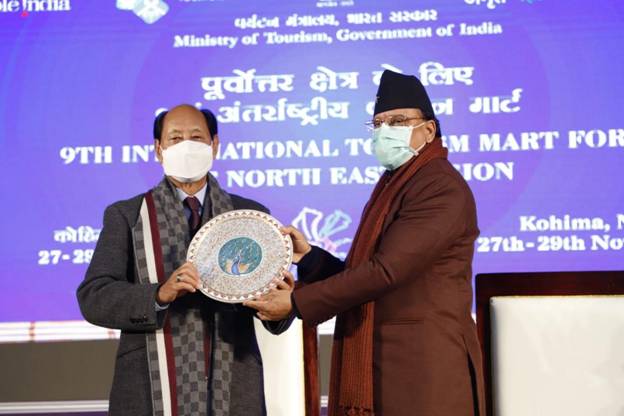 Speaking on the occasion, Chief Minister of Nagaland Shri Neiphiu Rio expressed the hope that the International tourism Mart in Kohima will give a boost to the tourism and business sector not only in Nagaland but the entire Northeast. He also hoped that North East will become a favourite destination in the country for tourism and business. While pointing out that tourism sector has been greatly affected by the pandemic, he thanked the ministry of tourism for organising the event in Kohima.

During his address Shri Ajay Bhatt said that Prime Minister Shri Narendra Modi appealed from the Red Fort that everyone should visit North East, it has immense tourism potential. The simple nature and hospitality of the people here is incomparable, which I am experiencing myself, he said. Tourism and culture complement each other. If our culture is rich, then tourism is the best way to know and understand this richness. Shri Bhatt added that in this Tourism Mart we are emphasizing on domestic tourism. About 75 sellers from the Northeast and about 50 buyers from the country are participating in the Mart. “Many parts of this region are still untouched from the point of view of tourists. There is a huge potential of Border tourism and wildlife tourism”, he added.

Shri Bhatt further said that this year 50 students from different parts of the country have got an opportunity to know and understand Northeast India through the programme. I would also like to ask the ambassadors of different countries to motivate the tourists of their country to visit this region of India. The Government of India is doing many things for the development of tourism in the Northeast. To prepare the infrastructure, the Government of India has sanctioned funds in the northeastern states under the ‘Swadesh Darshan’ and ‘Prashad’ schemes. Under the ‘Swadesh Darshan’ scheme, 16 projects have been approved in the North-East these have been completed or are nearing completion. He appealed to State Governments to celebrate Azadi Ka Amrit Mahotsava with great enthusiasm.

Speaking on the occasion Shri Arvind Singh said, “International Tourism Marts is biggest travel and tour networking event in the North Eastern Region of the country. The rich natural beauty, serenity and exotic flora and fauna of the North Eastern India are invaluable resources for the development of tourism especially eco-tourism. The facilities for tourists to stay, for food, shopping and entertainment are improving tremendously.” Shri Singh added that Travel & Tourism is one of the world’s largest economic sectors, creating exports and prosperity around the world. Indian Tourism sector has emerged as one of the key drivers of growth for Indian economy. Shri Arvind Singh further said that as Prime Minister has stressed on the need of introducing the students to the rich culture and heritage of North Eastern Region, today in this event we have students participating from all over the country.

The event was attended by the High Commissioner, Brunei Darussalam, High Commissioner, Malaysia, Ambassador Extra Ordinary, Republic of the Union of Myanmar, Ambassador, The Socialist Republic of Vietnam, amongst other attending dignitaries and diplomats. Other high-ranking officials from participating Ministries/Government bodies are also going to be part of the event. The three-day event will be attended by over 300 delegates including government officials, industry stakeholders and local participants. In line with the Prime Minister’s vision of ‘Ek Bharat Shreshtha Bharat’, the delegation also includes students from across the country who, as part of a study tour, will be interacting with local students and immersing themselves in the region’s rich heritage and culture.

In addition to these, the event also includes presentations by state governments on their tourism potential and a vibrant exhibition by State Tourism Departments from the North Eastern region to showcase the tourism products of the respective participating states. Various engaging discussions on several aspects of tourism and unique tourism products in the North East Region and their potential are also a part of the event.

To further enrich the experience of the participants, the Ministry has organised a visit to Kisama Heritage Village, Kisama War Museum and Morungs, Khonoma Village and Kohima World War II War Cemetery. The visiting delegation will be familiarised with the local community, local art and culture, and the rich heritage of Nagaland.

The International Tourism Marts are organised in the North Eastern States on a rotation basis. Nagaland is hosting this Mart for the first time. The earlier editions of this Mart have been held in Guwahati (Assam), Tawang (Arunachal Pradesh), Shillong (Meghalaya), Gangtok (Sikkim), Agartala (Tripura), and Imphal (Manipur).