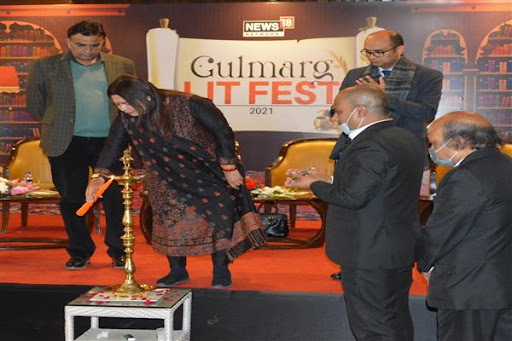 Union Minister of State for External Affairs and Culture Meenakshi Lekhi on Wednesday inaugurated the first-ever literary festival at the famous tourist destination of Gulmarg in Jammu and Kashmir’s Baramulla district as part of the ‘Iconic Week’ celebrations under Azaadi Ka Amrit Mahotsav.

The literary festival organized by the J-K government has brought numerous literary personalities across the country to mark the 75 years of independence. Acclaimed writers, emerging poets, intellectuals discussed and analyzed several aspects of literary traditions in the festival, an official spokesman said.

Lekhi praised the efforts of J-K UT administration for organizing festival of this kind and said such kind of festivals are inspiring youth across the country to explore their inherent creativity and also attract literati loving people.

She emphasized that literary festivals provide a platform to the budding writers and young enthusiasts to express their ideas and feelings.

The Union minister said Kashmir has always been a seat of learning cultures since ancient times and these lit festivals can play a part in maintaining that harmony and coexistence.

She stressed that such festivals definitely protect our culture, heritage and also play role in celebrating our ‘Unity in Diversity’.

In this session, Assad, who is a recipient of Rashtriya Gaurav Award, 2019 for his book ‘Barf Zaar’, presented some of the famous couplets from his book.

In another session, in conversation with Geetika Kohli, celebrated poet and famous Bollywood lyricist Irshad Kamil threw light on his literary journey.

In the afternoon session, Indra Basu had conversation with Dolly Thakur on the theme, ‘Many Language of Belonging’.

Later, the Union minister also visited Martand Temple Mattan in Anantnag district and performed Puja. She was apprised about the history and present status of the temple.

She assured all possible measures for bringing the temple on the tourism map of the country so that more and more tourists are attracted to this place.

Lekhi also interacted with some tourists, who shared their experience with the minister. The tourists expressed satisfaction with regard to the hospitality of the valley.

The minister while interacting with the officers said she shared a special relationship with the UT of J-K and Police as she comes from a family who served in the police department for three generations, a police spokesman said.

Leekhi while interacting with the lady officers said it was fascinating to see the women sharing spaces of public offices and responsibilities with the male counterparts in building the nation.

She said her ministry will try to develop religious and heritage tourism in UT so that tourists in large numbers are attracted towards the religious and spiritual places here.

On the occasion, the DGP gave an insight into the security scenario in J-K and said that from the last three years, the peace and progress have been moving forward together and peaceful environment have brought dividends to the people who have contributed in a big way in our peace building efforts.

Law and order and security situation has shown a marked improvement in all respects with least loss of life and property incidents in the valley, he said.

There is no street violence and the favourite ‘Bandh Call’ culture of separatists has ended almost completely, Singh said.

He informed that the changing environment has upset the Pak agencies and their proxies and the recent innocent civilian killings was indicative of their frustration with people’s partnership in peace and progress and communal harmony.

The DGP said such elements shall not be spared and stringent measure shall be taken to defeat their nefarious designs. He said peace, harmony and brotherhood among the people living here shall be safeguarded and added that J&K Police along with the security forces are working in a well coordinated manner to foil these evil attempts.

He also briefed the minister regarding various initiatives of Jammu and Kashmir Police in engaging the youth in positive activities.

Tagged with: literary festivalUnity in Diversity