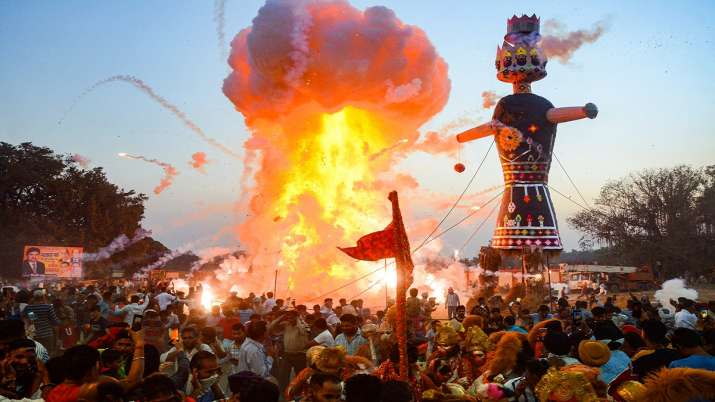 Amid chanting of Vedic hymns and blowing of conch, Ravana was worshipped at a Shiva temple here on Friday when the country celebrated Dusshera to mark the victory of Lord Ram over the demon king.

The event was organised by the Lankesh Mitra Mandal at the temple on the banks of the Yamuna river.

Like a drive against crop residue burning, the government should also start a drive against Ravana’s effigy burning as it also pollutes the environment, the mandal’s national president Omveer Saraswat said.

Crop residue burning in some northern states cause high levels of air pollution in the Delhi and National Capital Region during the winter months.

Saraswat said that as the government is not taking any steps on stopping burning of Ravana effigies, he would request the Chief Justice of India to take cognisance of the matter.

The act of Ravana is pardonable since he had enticed Goddess Sita simply to take revenge for the humiliating act of Laxman who had insulted his sister Surpanakha, he claimed.

Ravana not only acted as priest of Ram but also blessed him for victory, Saraswat claimed.

Prior to Ravana’s worship at the temple, the bathing ceremony of Lord Shiva with curd, milk, honey, ghee and khandsari was performed, he said.

He said effigies of Ravana and Meghanath were not burnt this year in the main Ramlila of Mathura owing to Covid-19 restrictions.