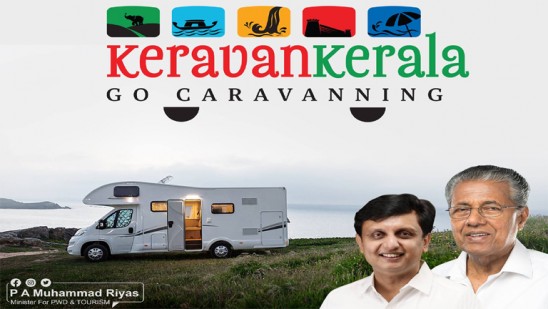 Giving a major impetus to “Keravan Kerala”, the state government’s unique initiative to promote stakeholder-friendly Caravan Tourism, auto major BharatBenz on Tuesday rolled out a spanking new and feature-laden vehicle, the first of its kind in the coach industry for the tourism sector.

The customized stylish vehicle, equipped with all the trappings for a smooth ride and comfortable stay, was jointly launched by Tourism Minister P A Mohamed Riyas and Transport Minister Antony Raju at a function in the city, the Tourism Department said in a release here.

Speaking on the occasion, Riyas said “Caravan Tourism is going to provide the much-needed energy to the relentless efforts of Kerala Tourism to explore the unexplored destinations. This initiative will set a new trend in experiential tourism in the state.”

Besides generating plenty of job opportunities, caravan parks would also become cultural hubs for clusters of panchayats where local communities could showcase their heritage and products, Riyas said.

Noting that this is a mega project between the Tourism and Transport departments, Raju said registered caravans will be given a special logo so that they will have hassle-free passage through green channel by avoiding unnecessary on-road checks.

“The launch of caravan tourism has opened a new chapter in Kerala’s tourism industry after the state made it big with houseboats three decades back. The Transport Department extends its full support to Kerala Tourism for the success of this initiative,” the Minister added.