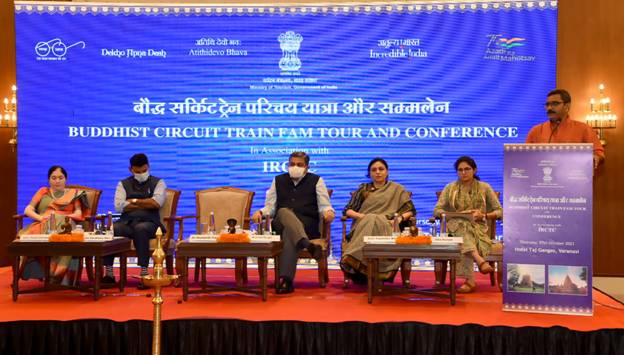 During hisvirtual address,  Shri G. Kishan Reddy said that Buddhism originated in ancient India more than 2500 years ago and spread through much of Asia. “With close to 500 million followers, Buddhists represent 7% of the world’s total population. The Indian Buddhist heritage is of great interest to the followers of Buddhism all over the world”, he added.

Shri Reddy further said that the philosophy of Lord Buddha guides many Indians even as they pursue other religions. He added that the Buddhist circuit is India’s pride. The important Buddhist sites currently receive approximately 6% of nationwide foreign tourist arrivals with Sarnath and Bodh Gaya leading the pack.

Shri Reddy added that the Tourism Ministry is working with various Ministries and organisations. Our aim is to improve the hard and soft infrastructure to improve the tourist and pilgrim experience to all the sites. “In this very special year which marks the 75th anniversary of our nation’s independence we must introspect and pledge to do everything to make India the number one country for tourism. As we celebrate the various events nationwide through ‘Azadi ka Amrit Mahotsav’, I do request your support in maximising participation”, he added.

Dr. Neelkanth Tiwari said that Uttar Pradesh has maximum 6 places related to Lord Buddha andrapid development work is going on at all these sites. The international airport at Kushinagar is ready to be inaugurated. Shri Tiwari further added that after the arrival of Prime Minister Shri Narendra Modi, the condition of Varanasi has changed and work has been done on projects worth several thousand crores. Minister gave details of the Buddhist Circuit and other religious tourist places.

Shri Arvind Singh said that the Ministry of Tourism has been appointed as the nodal ministry to work on reviving India as the Global Centre of Buddhist Culture and Tourism. “Under its flagship scheme “Swadesh Darshan”, which focuses on the integrated development of theme-based tourist circuits, the Ministry has undertaken multiple projects as part of the Buddhist Circuits in the states of Madhya Pradesh, Bihar, Uttar Pradesh, Gujarat and Andhra Pradesh”, he added.

Shri Arvind further said that under Uttar Pradesh Buddhist Circuit, Shravasti, Kushinagar, and Kapilvastu, Projects have been undertaken for infrastructure development which will be completed in 2021. “The construction of a Cultural Centre at Bodhgaya, Bihar is also underway. Under the PRASHAD scheme, the Ministry has sanctioned multiple projects in Andhra Pradesh, Uttar Pradesh, and Sikkim. In Varanasi, projects worth Rs 9.5 Cr, focusing on the development of Buddhist structures, have been completed. These include a sound and light show at Dhamek Stupa and a Buddha Theme Park at Sarnath”, he added.

The Tourism Ministry has taken a four-fold development strategy that focuses on improving the connectivity via air, rail, and roads, enhancing the tourism infrastructure and dependent services, streamlining branding and promotion and showcasing the culture and heritage. Under Swadesh Darshan Scheme, 5 projects worth Rs325.53 crore have been sanctioned for Buddhist circuit development in the states of Madhya Pradesh, Uttar Pradesh, Bihar, Gujarat and Andhra Pradesh and those sanctioned projects are under different stages of implementation. While works of Rs 44.19 crore on three projects have been sanctioned under PRASHAD Scheme; in Varanasi, two projects including a sound and light show at Dhamek Stupa and a Buddha Theme Park, Sarnath, worth costing Rs 9.5 crores for the development of Buddhist structures have been completed.

In addition to the development of tourism related infrastructure under the various schemes of the Ministry of Tourism, emphasis is also being put on promoting the various Buddhist Sites within India and overseas markets. As part of the above, India Tourism Offices in overseas markets regularly participate in a number of travel and tourism fairs as well as exhibitions wherein India’s Buddhist Sites are promoted. Also, Ministry of Tourism organises Buddhist Conclave every alternate year with the objective of promoting India as a Buddhist Destination and major markets around the globe. The upcoming International Buddhist Conclave is scheduled from 17th to 21st November, 2021. Ministry has undertaken multiple projects under branding and promotion that are currently in the pipeline including a live virtual exhibition at national museum, web portal, annual events calendar, social media marketing, campaigns in key source markets like Vietnam, Thailand, Japan, South Korea, Sri Lanka, etc.

The Ministry has also worked on projects for capacity building that include Linguistic Tourist Facilitator training in Thai, Japanese, Vietnamese, and Chinese languages. 525 people have been trained in these languages between 2018 to 2020, and 600 more will be trained between 2020 and 2023. This is especially important as Buddhism, has branched out to a large part of Asia, and 97% of the world’s Buddhists are concentrated in East and Southeast Asia alone. Hence it is important to develop a linguistic connect with the tourists.