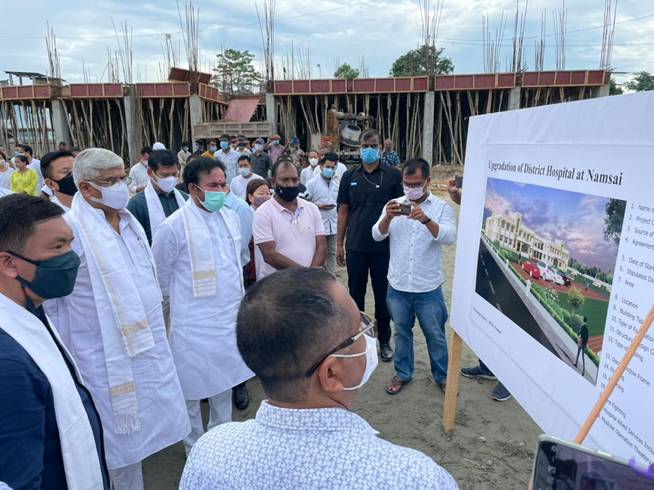 The Union Minister G Kishan Reddy along with Shri Gajendra Singh Shekhawat ji laid the foundation stone for the project “Development of Parshuram Kund” under the Prashad scheme in Arunachal Pradesh. He said “It is a pleasure to be here in Arunachal Pradesh at Parshuram Kund for the inauguration. It is a pilgrimage centre that has a great significance for Bharat.I am happy to know that under the Prashad scheme, Rs. 37.88 crore have been sanctioned for various initiatives like development of existing kund, Tourist Information Centre, Modern Pilgrim Facilities among others will be taken up as part of the project.The State truly offers a dream destination for biking and eco-tourism.”

The Union Minister also took this opportunity to post glimpses of the 70 Km bike ride “Glimpses of the 70kms bike ride which we undertook from ParashuramKund to Marua in #ArunachalPradesh amidst the serene valley, scintillating mountains and the thick forests for which Arunachal is famous for. This incredible state is a must visit for all!”, he added on twitter

While interacting with the officials he said “The Ashthalakshmi states are also home to immense ethnic, cultural and linguistic diversity.Thisis a unique opportunity for the North-Eastern region to showcase its tourism potential.We need to build confidence among the tourists especially in the light of Covid-19”.

The Union Minister was also joined by Shri Gajendra Singh Shekhawat, Union Minister of Jal Shakti for the launch of multiple water projects under Jal Jeevan Mission across Arunachal Pradesh. The projects include an integrated drinking water project that aims to provide safe drinking water in 10 habitations under Chongkham block of Namsai District, the only aspirational district of Arunachal Pradesh, with 70 LPCD of treated drinking water for a period of 30 years. This incurred a capital cost of Rs.32.49 Cr. Apart from this ministers also reviewed the progress of the Functional Household Tap Connection(FHTC) that covered 42 villages and 45 habitations that included a total of 3793 households, 44 nos. of Schools and 103 nos of Anganwadi centres including all religious places, community halls and other institutions. Theminister lauded the efforts of the dynamic leadership of Chief Minister of Arunachal Pradesh Shri Pema Khandu ji for achieving 100% saturation and said “I want to congratulate the reformist, innovative and progressive leadership of the state’s Chief Minister who has been relentlessly working for the development and welfare of the state of Arunachal Pradesh. The dream of our Prime Minister Shri Narendra Modi ji to provide pure water from the tap to every village and every household is being fulfilled by the Arunachal government.” This was achieved with a cost of Rs. 67.78 crores.

On the second day of his official visit to Arunachal Pradesh, the Union Minister G Kishan Reddy also inspected ongoing developmental works at the district hospital in Namsai. He was accompanied by Shri Gajendra Singh Shekhawat and Pema Khandu ji. G Kishan Reddy said “The Narendra Modi government is committed to providing quality and affordable health infrastructure in the region. I am glad to share with you all that the Ministry of DoNER has sanctioned a project under North east Special Infrastructure Development Scheme (NESIDS) for procurement of hospital equipment to various Districts hospitals to fight against the pandemic. A total of 5.7 crore were sanctioned for Namsai District Hospital which include oxygen generating plants, ambulance, CT scan etc.Today we have administered more than 80 crore vaccine doses in the country and more than 11 lakh doses in Arunachal Pradesh. I want to congratulate the health workers who have been relentless since the beginning of the pandemic.”

G Kishan Reddy along with Shri Gajendra Singh Shekhawat also attended and addressed the Inaugural session of conference on Sustainable Development Goals with the Deputy Commissioner of the state at the Multi purpose conference Hall in Namsai, Arunachal Pradesh. While addressing the session he said “I believe we need to emphasise the need for effective implementation and delivery of various government schemes to achieve the targets. Recently we at the Ministry of DoNER  andNiti Aayog  launched the SDG Index and Dashboard in collaboration with UNDP India. This index evaluates the performance of the districts of the 8 states of the North eastern Region on Sustainable Development Goals and their targets”. “The ashtalakshmi States are making rapid strides in all fronts, we shall stand shoulder to shoulder with them as we continue to facilitate an accelerated development agenda in this region”, he added

Tagged with: Ministry of TourismParshuram Kund