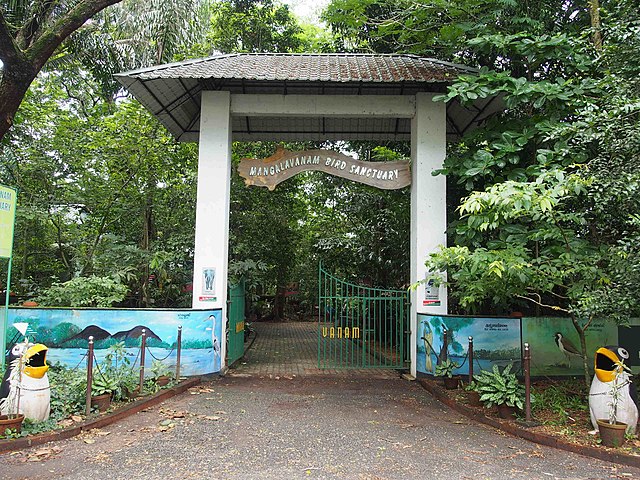 The Mangalavanam Bird Sanctuary is an ecologically sensitive area situated at the centre of Kochi behind the Kerala High Court building fittingly dubbed as the ‘green lung of Kochi’. The place primarily is a bird refuge surrounded by the Arabian Sea and backwaters, Mangalavanam is a congregation of communally breeding birds.

Mangalavanam is a nesting ground for a large variety of migratory birds is one of the best places for birdwatchers and twitchers. This green paradise is also a roosting place for residents as well as migratory birds. A survey conducted in 2006 revealed that there were 194 birds belonging to 32 species, in Mangalavanam.

Mangalavanam also supports many types of mangroves and their associated species that have their roots in the nourishing earth of Mangalavanam include Avicennia officinalis, Rhizophora mucronata, Acanthus ilicifolius and Acrostichum aureum. Among these Acanthus ilicifolius is considered to be endangered and Rhizophora mucranata as a vulnerable species, according to International Union for Conservation of Nature (IUCN).

The best time to visit the sanctuary is in the early summer months, especially from mid-January to early-March.