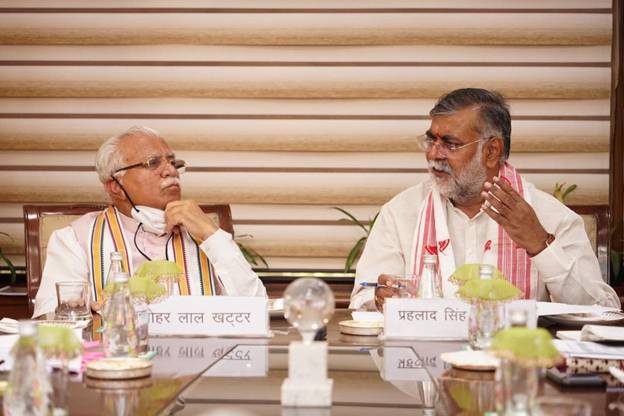 Union Minister of State(I/C) for Culture & Tourism Shri Prahlad Singh Patel and Chief Minister of Haryana Shri Manohar Lal Khattar held a meeting in New Delhi for the development of new tourism-related projects in Haryana and to speed up the ongoing projects in the state. Secretary, GoI, Tourism Shri Arvind Singh , joint secretaries of Union Ministries of Tourism and Culture and other senior officers of Central and State government were also present during the meeting.

During the meeting, the state government gave details of the proposed Krishna Circuit Project-II. Development of tourist infrastructure at important tourist/pilgrim places related to SrimadBhagwad Geeta & Mahabharata at Kurukshetra, Kaithal, Jind, Karnal, Panipat and Mewat under the Krishna circuit phase-II of Swadesh Darshan Scheme is planned under this project. Apart from this, the two sides discussed Heritage Circuit Rewari, virtual museum at Jyotisar near Kurukshetra and development of Pinjore Gardens, MorniHills , science city among others.The progress of ongoing PRASHAD projects at Nada Sahib Gurudwara and Mata Mansa Devi were also reviewed by ShPrahald Singh Patel and the state government was asked to speed up the completion.

Union Minister for Tourism & Culture (I/C) Prahlad Singh Patel said that after completion of Krishna circuit projectI, the Haryana state government is now working on Krishna circuit project II and the central government will extend support under its existing schemes of Tourism and Culture ministries including Swadesh Darshan. Shri Patel appreciated the proposal of the state government for setting up an impressive virtual museum based on Gita & Mahabharat at Jyotisar, a presentation of the same was made at the meeting.

ShPrahlad Singh Patel laid special emphasis on the Rakhigarhi project which is being developed as one of the five iconic archaeological sites in the country and said that once developed, it has a huge potential to attract tourists.

Later, talking to media, Shri Manohar Lal Khattar expressed his happiness at the encouraging response from the Centre for the various tourism and culture related projects in the state of Haryana. Shri Khattar added that we have proposed a plan for Jyotisar which is a major pilgrimage site near Kurukshetra, Haryana, where Lord Krishna revealed the Gita. Our Plan is to develop an experiential Museum there with the aim of fostering a better understanding of the essence of the Geeta and the Mahabharat, ShKhattar explained.