Kerala’s only lake temple,  guarded by a vegetarian crocodile with unknown origin 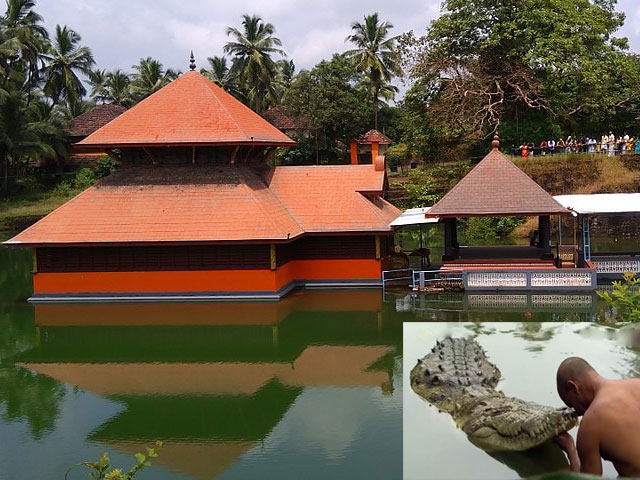 The Landscape on the way to the temple opens a vast panoramic scene with ranges of sprawling hillocks in the background. An aura of peace and solitude permeates the whole region. In the midst of a vast grassland remains in splendorous charm Sri Anantha Padmanabha Swamy Temple, in the centre of a rectangular lake.

Here, in the sanctum sanctorum, of the temple, Sri Anantha Padbhanabha is depicted as seated on the divine serpent Anantha, while in the Sri Padmanabha Swamy Temple of Thiruvananthapuram, the Lord is reclining on Anantha. On both the sides of the Lord are Bhoodevi, the Goddess of Earth and Sreedevi, the Goddess of Prosperity. Garuda and Hanuman stand in front of them praying with folded hands. Heavenly maidens tan the Lord and his consorts from behind. Jaya and Vijaya, Lord Vishnu’s attendants, stand in guard at the entrance.

The Legend about the temple associates it with the great mystic and devotee of Lord Vishnu, Sree Vilvamangalathu Swami, who dominates the ancient spiritual lake of Kerala. In fact, his fame extends the borders of Kerala. In Bengal he is popular as Bilvamgala.

On the north-East corner of the lake there is still a big cave with a small pit with a perennial presence of water in it, which is considered as a sacred Theertham. It is believed to be the cave where boy Krishna disappeared.

Near the south-west corner of the lake there is a shrine housing a very graceful idol of Sreekrishna believed to have been the same idol worshipped by Sri Vilvamangalathu Swamy.