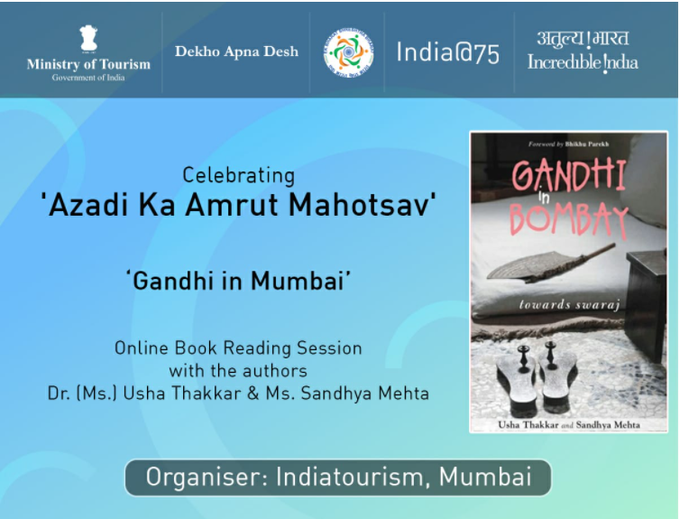 As part of the Azadi Ka Amrit Mahotsav celebrations, the Indiatourism Mumbai, Regional Office of Ministry of Tourism in the Western Region organized an online book reading session of “Gandhi in Bombay’’ by the authors Dr.(Mrs) Usha Thakkar and Ms. Sandhya Mehta on 15th March 2021.

During this book reading session, the authors turned as story tellers and kept their audience engrossed with reading interesting lines from selected chapters from the book and there by transporting the participants back in time when Mahatma Gandhi walked the streets of Bombay, now Mumbai.

The authors mentioned how Mumbai the then Bombay, the nerve centre of Gandhi’s many political activities, earned an enviable place in India’s freedom struggle under his leadership. The authors recounted his days in Mani Bhavan and how in  1919, Gandhi initiated his first nationwide protest, the satyagraha against the Rowlatt Act, in this city, which propelled him to the position of a pre-eminent political leader. The authors also spoke about the other important movements launched by Mahatma Gandhi ji from Bombay namely Non-Cooperation Movement of 1920 and Quit India Movement in 1942 etc.

Ms. Rupinder Brar, Additional Director General, Ministry of Tourism in her opening remarks mentioned how the Ministry of Tourism has embarked on the path of celebration of Azadi Ka Amrit Mahotsav by organizing various events along with participation of Travel Trade & hospitality members, Guides, Students, General Public/visitors etc. She also mentioned about the launch of the Azadi Ka Amrit Mahotsav by  Prime Minister Shri Narendra Modi in Ahmedabad on 12th March 2021 and flagging off the ‘Padyatra’ (Freedom March) from Sabarmati Ashram, Ahmedabad.

Azadi Ka Amrit Mahotsav (India @ 75) is a series of events to be organised by the Government of India to commemorate the 75th Anniversary of India’s Independence. The Mahotsav will be celebrated as a Jan-Utsav in the spirit of Jan-Bhagidari.