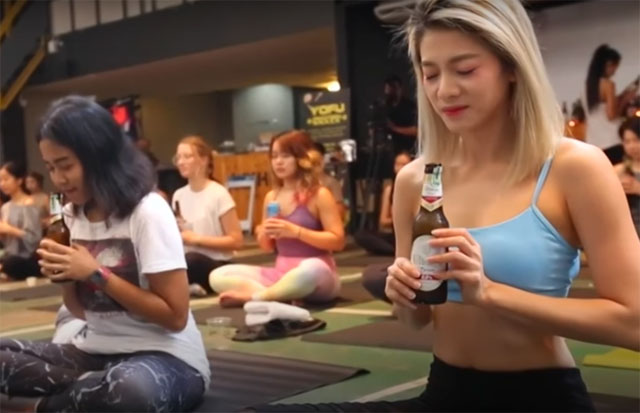 For some, a post-lockdown group activity that combines exercise with alcohol may seem like the ideal coronavirus stress-buster – though yoga purists should probably avoid Phnom Penh’s TwoBirds Craft Beer brewery while it’s taking place.

The brewery’s yoga classes, resumed after a six-week lockdown across Cambodia – which has officially recorded not a single COVID death – were lifted on Jan. 1, combine holding a pose with clutching a beer, and they’re attracting devotees.

“I have more fun with beer yoga. It’s not as serious as traditional yoga,” said Sreyline Bacha, 25, as she reached for a beer glass, wobbling just a little to maintain her balance in a pose.

“We are with friends and say ‘cheers’ and sip beer and that makes me feel very happy,” added Bacha, who manages social media influencers.

Its creation was attributed to a stunt at America’s Burning Man festival in 2013, beer yoga has since enjoyed sporadic popularity in different parts of the world.

“It’s not like a real yoga practice, it’s more like a gathering with friends, incorporating yoga moves for entertainment,” said instructor Anna, who arrived in Cambodia about two months ago.

Connor Cheney Kirsch, general manager of BeerPro Import Export Co., which owns TwoBirds, said the classes, held in a former garment factory, were about community and bringing people together after work.

“If you fall over, or something, nobody is going to look at you in a strange way. It’s all about the fun,” said Kirsch.