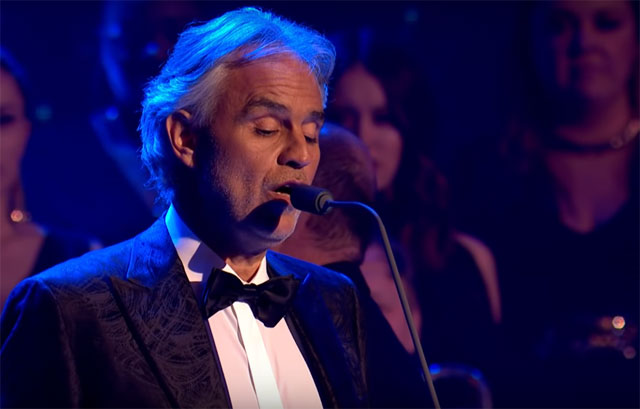 The Dubai Opera hosted legendary Italian tenor Andrea Bocelli and a troupe of renowned Israeli singers including Idan Raichel as part of a historic concert held at the Dubai Opera. The event, titled ‘A Celebration of Peace’, was held in celebration of the growing momentum for peace in the region.

The concert, which featured the participation of musicians from the UAE, highlights Dubai and the UAE’s global reputation as a beacon of tolerance and peaceful coexistence and a model for intercultural harmony and diversity. It also reinforces Dubai Opera’s rising profile as a unique international hub for performing arts and world-class entertainment.

Hosted by the Israel Export Institute in partnership with the Israeli Ministry of Economy and Bank Hapoalim, the event was attended by an Israeli delegation that had participated in GITEX Technology Week held at the Dubai World Trade Centre from 6-10 December. Leading business personalities and government officials from around the world also attended the event.

Maestro Andrea Bocelli, said: “I am happy to have been able to give my modest contribution through the universal language of music, which transcends borders and is capable of speaking to the soul and reaching our hearts, as we continuously strive to spread the message of peace.”

Conducted by Maestro Carlo Bernini, the concert included performances from popular Israeli singer, producer, and performer Idan Raichel and Talia Or, an Israeli soprano who flew from Germany especially for the occasion.

Idan Raichel, who was performing for the first time in Dubai, is known for his musical venture called ‘The Idan Raichel Project’. He became one of the most successful artists in Israel and is one of the country’s leading music ambassadors abroad, with performances at some of the world’s leading festivals and venues.

His Excellency, Helal Saeed Almarri, Director General, Dubai’s Department of Tourism and Commerce Marketing (Dubai Tourism), commented: “The concert held on the sidelines of GITEX Technology Week not only highlighted the successful restart of Dubai’s events sector amid the pandemic but also underlines the strategic role that events can play in promoting cross-cultural understanding and cooperation. Apart from strengthening collaboration between Dubai and participating establishments in the fields of trade, technology, and tourism, the musical performance at Dubai Opera was also a celebration of Dubai’s stature as a global icon of peace and multiculturalism and further reinforces the city’s position as an international events destination.”

Accompanying Maestro Bocelli was the Arabian Philharmonic, featuring musicians from the UAE and the United Kingdom, who flew in specially for the concert. Bocelli sang some of his most-loved songs, including La Donna e Mobile, O Soave Fanciulla, Amazing Grace, Nessun Dorma, and Time to Say Goodbye.

Bocelli is currently launching his album ‘Believe’, which marks unity in light of the challenges that COVID-19 has brought to the world this year. Following his concert in Dubai, Bocelli headed to the world-famous Dubai Fountain to listen to two of his songs being played. Also, an image of his album ‘Believe’ had been projected on the Burj Khalifa, the world’s tallest building.

Adiv Baruch, Chairman, Israel Export Institute, said: “This was truly a remarkable and historic concert and is the result of the collaborations that we at the Israel Export Institute succeed in producing for Israel. Our heartfelt gratitude goes out to Andrea Bocelli for joining this outstanding event, which further highlights the cooperation between Israel and the United Arab Emirates.”