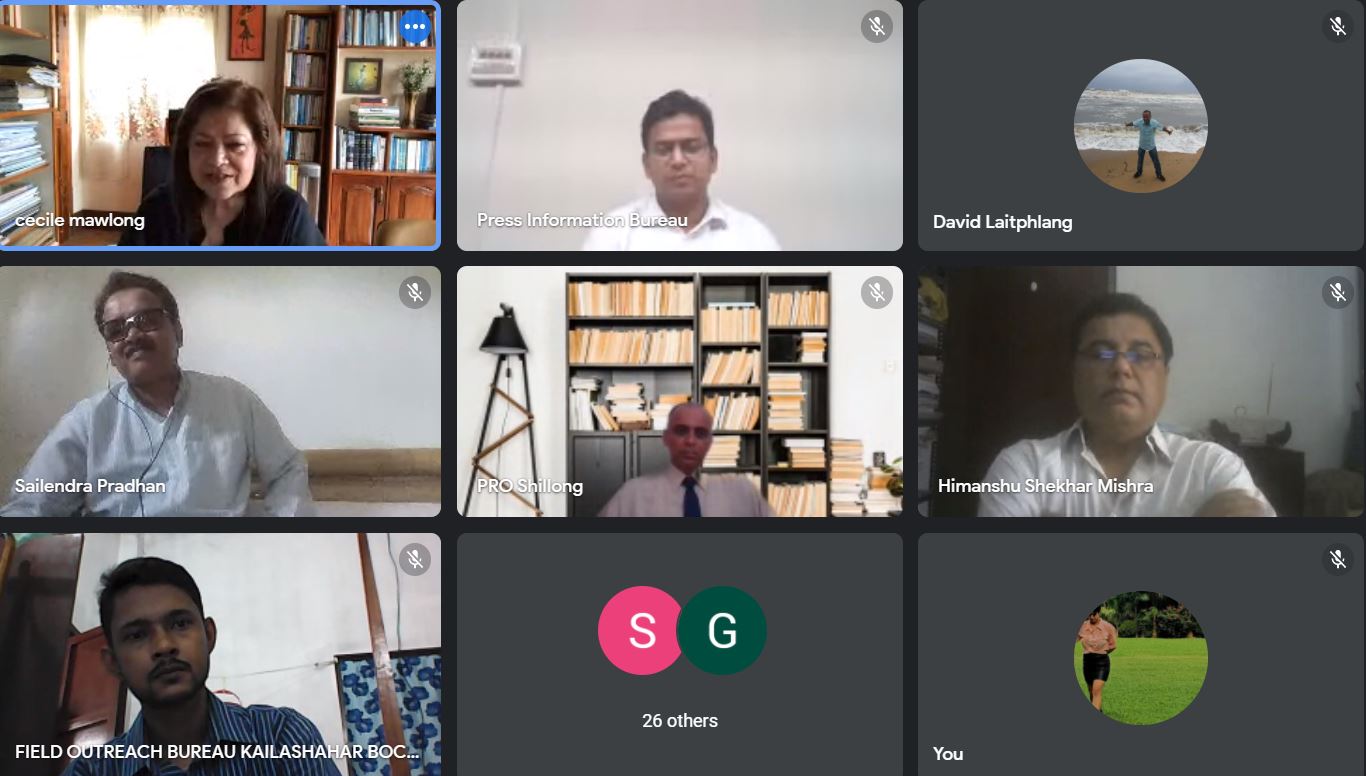 With India celebrating its 75th year of independence, the discussion highlighted the efforts of the Freedom Fighters, Historians, Writers and the associated people to develop the sentiment of anti-British and embracing freedom instead. Today’s webinar reminisced the country’s freedom and marked the occasion of Azadi Ka Amrit Mahotsav in reverence of the unsung Heroes of Meghalaya.

Prof (Dr) Mawlong dwelt on the freedom struggle of the Unsung Heroes of Khasis. She began with the valour of U Tirot Sing, the great freedom fighter from Khasi Hills, who declared war and fought against British for attempting to take over control of the land of the Khasis.

She referred to Prof. Helen Giri whose work is entitled ‘The Khasis Under British Rule’ (1824-1947). The Historians and writers have written extensively on U Tirot Sing and the Anglo-Khasi War, she said, adding that a lot has been written on the 1829 War, the confrontations of the Chiefs of the Khasi Hills and the British.

She was categorical about an interesting subject – the role of readership in igniting the sentiment of nationalism. She informed how the translation of Indian Epics in Khasi language helped the historians in making the Khasis familiar with the culture and tradition of the rest of the country.

She, in particular, mentioned the efforts of U Sib Charan Roy, the eldest son of Babu Jeebon Roy, the ‘Father of modern Khasis’. She entailed his life and how he became instrumental in raising his voice against the British. Prof Mawlong specifically mentioned about a school at Mawkhar, which was founded to educate the underprivileged Khasi students. She stressed on  Roy’s efforts in running the School as its first Headmaster in a shoestring budget following his disagreement with the institute’s curriculum.

He wrote a letter to Mahatma Gandhi expressing the problems he faced, she added. Gandhi, in turn, published his response in Harijan, his publication, intervened and later helped the school receive a grant for its proper functioning. She also mentioned about Lala Lajpat Rai visiting Shillong in 1939 and contributing a small sum to the school.

Prof. Shobhan.N. Lamare, Department of History, North-Eastern Hills University who is known for his researches and works relating to the life and history of the Jaintias dwelt upon the freedom struggle of the Jaintias in an attempt to understand the colonial psyche and the Jaintia resistance.

Prof Lamare referred to the attack of the Bristish Camp in Jowai on March 22, 1980 which signaled the outbreak of the resistance against the British. By the month of May a number of prisoners were taken by Rowlatt to Cherrapunji. They were Dalois, Pators or men who were involved in the fight or those who had been actively engaged in carrying out the resistance. Some of them were U Bnai ex-Daloi of Ralliang; U Kat former Pator of Ralliang; U Skam ex-Daloi of Changpung; U Chan ex-Daloi of Changpung, U Iong ex-pator of Nongbah; U Mon ex-Daloi of Nartiang; U Long Sutnga of Nartiang; U Iong ex-Daloi of Nangjngi; U Parbat, U Rymbai, U Byong Songloo of Satpattor.

U Kiang Nangbah, a commoner, was chosen and garlanded by the Daloi of Nartiang to lead the struggle against British Imperialism. U Kiang Nangbah and his most trusted Lieutenant U Chey Rangbah toured and inspired the people. The leaders who were working with U Kiang Nangbah were U Long Padu, U Swar Sutnga, U Mon Rymbai, U Bang, U Bakher, U Mulon Mynso, U Kiang Sule, U Kat Changpung and U Woh Riang.

U Mulon, the former Daloi of Mynso and the principal leader after the execution of U Kiang Nangbah declared his determination to carry on the fight till the last. He was regarded as the successor of U Kiang Nangbah. In the mean time U Sa Nartiang, the son of U Kat from Rymbai was captured and tried by Captain Morton on 16th January 1863. He was found guilty of rebelling against the British and was hanged.

Prof Lamare referred to the incident of 29th and 30th of January 1863, when 106 men, women and children were captured and twelve of them were killed besides wounding many more in an encounter near Jowai. It was reported also that several women and children drowned in an attempt to cross the Mungot River in order to escape the British forces. In all the struggles it was pointed out that women and children were mixed up and the casualty had been high at times.

Prof Lamare also mentioned that on 1st December, more Jantias who had taken part in the resistance were captured from Sutnga. On 11th December U Kiang Bhein was captured. U Sawar the Daloi of Sutnga was killed in an encounter with the troops. U Chey Rangbah, the lieutenant of U Kiang Nangbah was killed in an encounter with the people of Nongbah. On 23rd March, 1864, Haughton, the Commissioner, in his message to the Government of Bengal wrote: “the people have been very severely punished and that all inclination to rebel is at an end”.

Prof Lamare gave a detailed account of many unsung heroes of the Jaintias who played a very pivotal role in instilling the sense of nationalism against the Britishers.

Senior Journalist and President Shillong Press Club, Shri David Laitphlang in his address appreciated the efforts of the Press Information Bureau in holding the webinar to spread information about the contribution of freedom fighters including ‘Unsung Heroes’ of the freedom struggle.

He opined that the learnings should be part of the regular curriculum in schools and colleges of the state. He also opined that the findings and minutes of the webinar, comprising the recommendation of the panelists, should be shared with the State Education Department. This will further help to ensure that the tale of the Unknown Heroes become part of the regular curriculum in the state, he added.

Shri S N Pradhan, Additional Director General, North East Zone, Ministry of Information and Broadcasting said that Press Information Bureau can share details of the webinar with the state government with recommendation from the panelists. He added that the government, under the leadership of Prime Minister Narendra Modi, aims to strengthen the economic development of the Northeastern Region (NER) in order to promote economic cooperation, cultural ties, and developing a strategic relationship with countries in the Indo-pacific region. The Ministry will collate details of Unsung Heroes from across the Northeastern states so that more people can learn about their lives and works, he added.