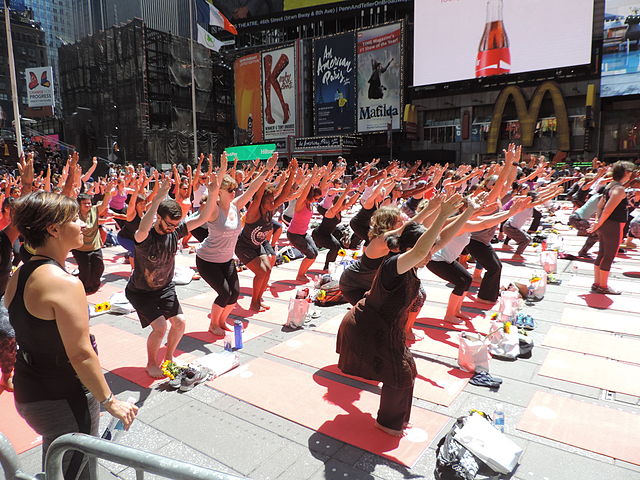 The curtain raiser event for the 7th International Day of Yoga was organized online Friday late evening with a galaxy of illustrious Yoga Gurus and experienced Yoga exponents coming together on the virtual platform along with two union ministers to appeal to the world community to adopt Yoga in their daily life for the betterment of both the individual self and the mankind. A mobile application, “Namaste Yoga”, devoted to Yoga, was also launched during the event.

The hour-long event, organized by the Ministry of Ayush in association with Morarji Desai National Institute of Yoga (MDNIY). Union Minister of Information and Broadcasting Shri Prakash Javadekar and Union Minister of State (IC) for Ayush Shri Kiren Rijiju underlined the importance of the central theme of IDY 2021 “Be With Yoga, Be At Home” while spiritual leaders and Yoga Gurus of international fame and following like Sri Sri Ravishankar, SadguruJaggi Vasudev, Sister Shivani, and Swami ChidanandSaraswati emphasized various unique and encompassing features of Yoga, ranging from deeper spiritual dimensions to its daily life and Covid related usefulness. Many other eminent personalities graced the event with their insightful messages.

On this occasion, Shri Prakash Javadekar said Yoga is a way to a healthy and happy life. The Government under the dynamic leadership of Prime Minister Shri Narendra Modi strives to promote Yoga among all sections of the society.

Ayush Minister Shri Kiren Rijiju briefed about the 10-day series on Doordarshan on IDY 2021 and said that the central message of this series is: “Be with Yoga Be at Home”, which is relevant in these times of health emergency. The efficacy of Yoga in health promotion and in the management and prevention of diseases has been well established. The benefits of Yoga towards immunity building and stress relief are demonstrated through evidence. “The Ministry’s aim is to bring more citizens into the fold of the activities of IDY than the previous years, thereby spreading the physical and emotional well-being brought about by Yoga among all sections of our society”, said the Minister. Formally launching a mobile application, “Namaste Yoga”, devoted to Yoga the Minister said that it is designed as an information platform for the public. It aims to raise awareness about yoga and make it accessible to the larger community.

The Yoga guru reinforced that Yoga is not only about physical health, but is related to overall well-being which is of utmost importance in this time of the pandemic. The yoga gurus gave a clear message,’ Yoga is about life, and practicing Yoga is the way in which we need to change our lifestyle.

Participating in the event, Sri Sri Ravishankar said that today’s world is in crisis and amidst pandemic, Yoga shows the way out. SadhguruJaggi Vasudeva laid stress on the practical aspect of Yoga and reiterated that practicing Yoga is to live a blissful life. Swami ChidanandSaraswati said that Yoga is not only a therapy that is being practiced from time immemorial but is also a way of life. Dr. HR Nagendra, Chancellor of the S Vyasa University said that Yoga is a science of holistic living. MaaHansajiJaydeva, Sister Shivani, Swami Bharat Bhusan, Prof. TanujaNesari, Dr. BN Gangadhar, Shri Kamlesh D. Patel, Shri O. P. Tiwari, Yogacharya, and Shri S. Sridharanalso shared their views.

Ayush Secretary Vd. Rajesh Kotecha and Joint Secretary PN Ranjit Kumar underlined the role played by the Ministry of Ayush and its commitment to facilitate the expansion of Yoga outreach in a collaborative model.

The curtain raiser event also marked the beginning of a 10-episode series on various aspects of Common Yoga Protocol to be telecast on DD India from 12th June 2021 to 21th at 7 pm (IST). The series is produced by produced Morarji Desai National Institute of Yoga (MDNIY).

An intervening panel discussion was also integrated into the event in which Director MDNIY Dr. IV Basavaraddi and Media Advisor of Ayush Ministry Sanjay Dev participated.