Valiyathura Sea Bridge; The story of a local symbol that disappears 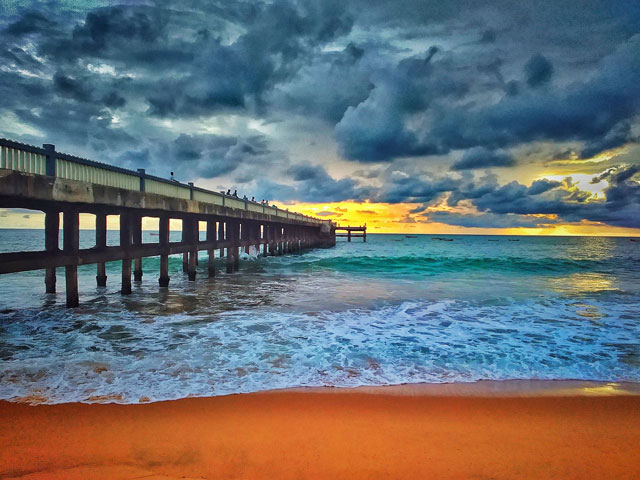 Slowly but surely, one of the local emblem is disappearing from the Thiruvananthapuram district. The present-day Valiyathura sea bridge was built when the iron bridge of the British collapsed. The sea bridge at Valiyathura was built during the British rule before the Indian Empire. As there were no ports at Thiruvananthapuram, a bridge was built for cargo ships. However, in the years following the departure of the British from India, the ‘story’ onshore is that the iron bridge was destroyed by a ship accident. In time, the bridge was forgotten. On some of the rare occasions now, some of its still intact pillars can be seen outside the sea. Maybe tomorrow this sea bridge will be a memory like that.

After the collapse of the old iron sea bridge built by the British, a new bridge was built ten meters south of the bridge. It was inaugurated on November 11, 1956, after the completion. Ten lakhs Ten thousand rupees were spent. 260 tons of Steel and 246 tons of cement were used for the bridge. The bridge was connected to the shore by 217 pillars lifting them. Up to sixty pillars were later lost over a period of time. No significant work has been done on the present sea bridge in 1976-78, except for some work on the damaged section. Funds were allocated several times but there was no significant strengthening.

During the use of this bridge, many ships from abroad were anchored here. The wheat, rice, cashew nuts, and cement that came through these ships reached the shore through this sea bridge. Thus four godowns were built to store the goods that landed. At that time they were full of foreign goods. Today, those warehouses are a relief camp for families who have lost their homes to the sea rage. As the ship approaches, it was a celebration on shore. There were four large cranes here to unload cargo from the ship. These cranes were used to transport cargo from the ship to trucks running on iron reels on the bridge.

But today those four cranes were taken to the Vizhinjam port construction. The locals protested a lot. The cranes were eventually taken away for repairs and said that could be brought back after repairs. But the Crane has not yet returned. During the repairs, the iron reels on the bridge, which looked like a railway track, were removed. With this, the main strength of the bridge, which was project into the sea in three parts, was lost. Those iron reels were the main strength of the bridge. They may have been lost around 2016. Until then, people had been allowed on the bridge. In 2016, authorities closed the gate to the bridge, saying the bridge was in a state of disrepair.

After repair, now again the bridge is in danger as it prepares for the inauguration. In 2016, there was a small crack at the shore connecting point. The bridge was then connected to the shore by a small iron ramp. Fishermen were later issued passes through this route. But outsiders were not allowed in. Meanwhile, security was deployed as there were some suicide attempts at the sea bridge. With this, the movement of the public to the bridge was restricted.

With each passing year, Thiruvananthapuram is having high coastal erosion. Each coast has stories to tell of the loss of four and five-row houses. When the siren from the mother ships leaves the Vizhinjam port tomorrow, this bridge will slowly fade from the attention of the people and eventually will join the sea. Thus another local emblem will disappear.