Colma; a city with more graves than houses 5 hours ago

Unauthorized houseboats should be seized – High Court 7 hours ago 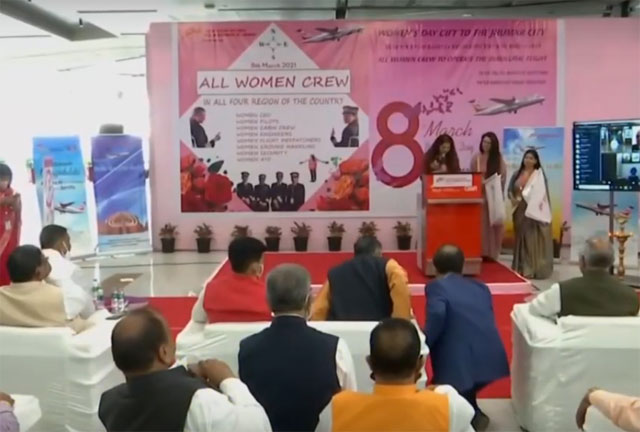 Marking the inauguration of a domestic airline, which coincided with International Women’s Day, on 08th MAR, an all-woman crew flew from Delhi to Bareilly with Santosh Gangwar, Union Minister and MP from Bareilly on board.

According to news reports, the maiden flight of Alliance Air, a subsidiary of Air India was flagged off by Hardeep Singh Puri , Union Aviation Minister, and was manned by Captain Poonam Yadav.

Minister of Civil Aviation Hardeep Singh Puri while announcing the inaugural flight, virtually said, “I would like to thank all the stakeholders who have done a tremendous job to get start the Bareilly flight under ‘Ude Desh Ka Aam Nagrik’ (UDAN) scheme.” “We have a strong team of women in the aviation sector, with 16 percent of staff controlling the Air Traffic Controller (ATC).

“Today is a matter of great pride for us because all the women are commanding the inaugural flight of Alliance Air and other 11 more flights from different routes under all-women crew,” he added.

According to the news sources, he tweeted his support to the flight crew and all the ground staff involved in the flight.

Colma; a city with more graves than houses 5 hours ago

Unauthorized houseboats should be seized – High Court 7 hours ago