Painted Eggs and Ceramics – Exploring the craftsmanship of Romania 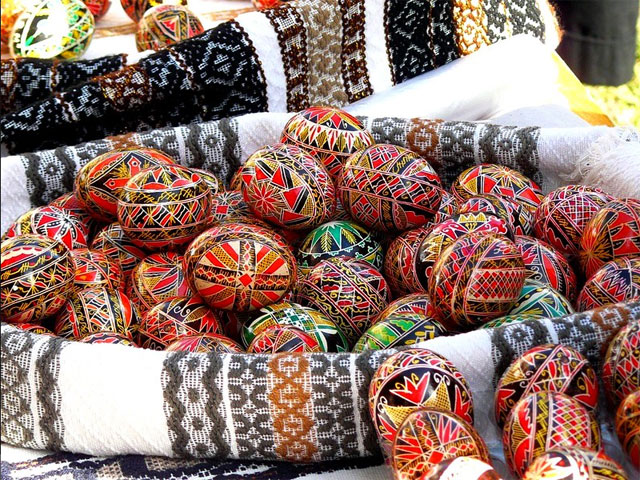 As in most parts of the world, full-time artists and artisans are drawn together, tending to form communities throughout the country, where locales are aesthetically inspiring and economically viable.  Bucharest and a few of the larger towns boast a few galleries showcasing work from such artist communities, but most don’t have galleries.  A few examples of local artists’ and artisans’ work are shown and sold in town museums, but most are sold in street markets adjoining major attractions.  Sellers usually are also the makers and many speak English.  A conversation with them can reveal fascinating facets of Romanian culture.  Craft which are most popular include

The most readily recognizable examples of Romanian art are the famed painted eggs, especially prominent around Easter time.  The painting of real hollowed-out eggs was an integral part of preparations for this festival of renewal.  Women and children gathered in someone’s home and spent a day painting and gossiping.  Intricate patterns were actually secret languages known only to residents of the regions where they were painted.  The oldest known were painted with aqua fortis (nitric acid) on a traditional red background.   They’re available in nearly all shops and street markets.

Romanian pottery is still made mainly on traditional kick-wheels with simple finishing tools.  Shapes, sizes, and patterns reflect the different clays and cultures of diverse areas where they are produced.  Color glazes and decorations vary from strong geometrics to delicate florals, animals, and humans.  There are approximately 30 pottery centers throughout the country, each with its own distinctive style, but the main areas are in Horezu in Oltenia;  Miercurea-Ciuc, and Corund in western Transylvania; Baia Mare near the northern border, and Radauti and Marginea in Moldavia.