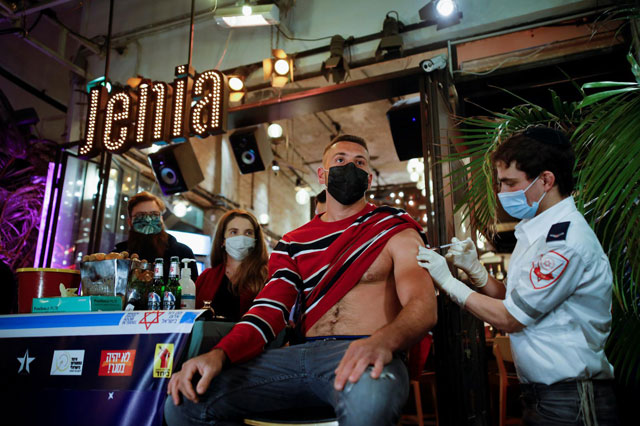 An Israeli bar doubled as a COVID-19 vaccination clinic on Thursday, with free drinks given to those who got the shots.

More than 43% percent of Israel’s 9 million population have received at least one dose of Pfizer Inc’s vaccine, the Health Ministry says. But officials worry that turnout may wane and hold back Israeli plans to begin reopening the economy.

With many bars forced to close because of the pandemic, Tel Aviv’s Jenia gastropub, in partnership with the municipality, opened its doors to an unusual type of patron: new vaccines, drawn by the offer of drinks on the house.

The drinks were non-alcoholic, as a medical precaution.

“I thought it is a really good opportunity to come and get the vaccine because I didn’t have either the time or the ability to go to other places,” said May Perez, among dozens of people who turned up for their first shots.

Statistics reveal that Israel has the world’s highest vaccination rate per capita. Nearly half of Israelis have received one shot, while one-third have received both doses. Permits have been issued to the vaccinated so they could resume leisure activities.