Get up close with the tallest mammals at the Giraffe Centre, Langata, Kenya 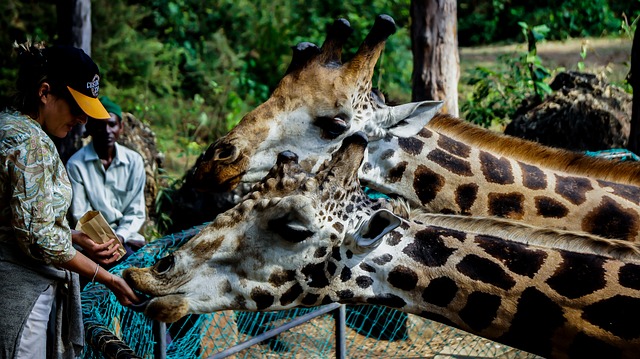 The AFEW (African Fund for Endangered Wildlife) Giraffe Centre is located in Langata, just outside Nairobi.

The centre has been ostensibly set up as a breeding centre for the endangered Rothschild giraffe, but now operates conservation/education programs for Kenyan school children.

The Africa Fund for Endangered Wildlife (A.F.E.W.) Kenya was founded in 1979 by the late Jock Leslie-Melville, a Kenyan citizen of British descent, and his American-born wife, Betty Leslie-Melville. They began the Giraffe Centre after discovering the sad plight of the Rothschild Giraffe. A subspecies of the giraffe found only in the grasslands of East Africa. At the time, the animals had lost their habitat in Western Kenya, with only 130 of them left on the 18,000-acre Soy Ranch that was being sub-divided to resettle squatters

There is good information on giraffes available here, and an elevated feeding platform where visitors meet the resident giraffes face to face.

Hand feeding giraffes is an education in itself. You will see, close at hand, how they use their long, prehensile tongues to remove leaves from prickly acacia branches.

The centre’s giraffe population wander freely through the lush gardens, and pay an occasional visit to the house itself, often pushing their heads through the French Windows to inspect the breakfast table.

The Giraffe Centre has also become world-famous as a Nature Education Centre, educating thousands of Kenyan school children every year.