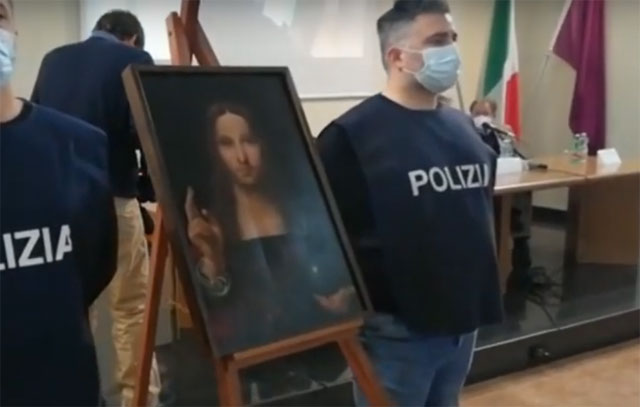 500-year-old painting titled ‘Salvator Mundi’ from the school of Leonardo da Vinci, which was stolen from a museum collection in the Basilica di San Domenico Maggiore and was discovered by police in Naples, Italy.

The painting, stolen from a Naples’ church museum, has been discovered in an apartment on the outskirts of the southern Italian city, police said on Tuesday.

Surprisingly the staff at the San Domenico Maggiore museum were not even aware that the portrait of Christ, believed to have been painted by a student of Leonardo da Vinci, was missing.

Police said a tip-off led them to the apartment at the weekend and they found the painting tucked away in a cupboard. The 36-year-old owner of the flat has been arrested on suspicion of receiving stolen goods.

The Doma Museum collection has been closed for some time because of coronavirus restrictions.

The painting is a copy of the famous Salvator Mundi (Saviour of the World), attributed to Leonardo da Vinci himself, that was sold for a record $450 million at auction in New York in 2017.