Only Hot Air Balloon for the Three Wise men at Seville this time, no Parade 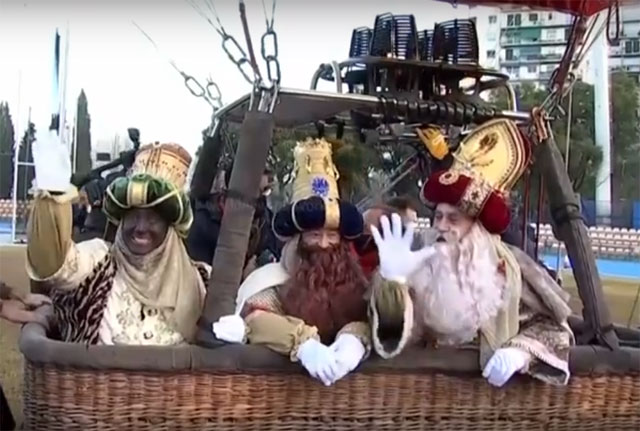 The Three Wise Men flew over Seville in a hot air balloon on Tuesday morning, after traditional street parades on the eve of the Epiphany were canceled throughout Spain to avoid drawing big crowds amid the coronavirus pandemic.

Melchior, Caspar, and Balthazar are widely celebrated in Spain on Epiphany (Jan. 6), when they are said to have visited the infant Christ with gold, frankincense, and myrrh.

On that day children get presents their parents tell them have been brought by the Three Wise Men, and not Santa Claus – even if the latter has also become increasingly popular in Spain.

Balthazar was impersonated by a white man with black face paint, as is often the case in Epiphany celebrations in some Spanish cities. The practice has not drawn the same degree of controversy and condemnation as the “Black Pete” Christmas character in the Netherlands – a fictional character usually portrayed by white people wearing black face paint and which is gradually disappearing.

After flying over Seville and waving at children watching from their homes, the Wise Men said they hoped they would be back with a proper parade next year.

“It has been an amazing flight. We come with huge enthusiasm to deliver all the presents,” told Caspar.

The three urged all people to follow health recommendations.

“You must follow the rules because soon enough we will be able to take off our masks and be able to give each other kisses and hugs and spread love all over Seville. Be prepared, 2021 is the year to end the pandemic and enjoy life,” Melchior said.