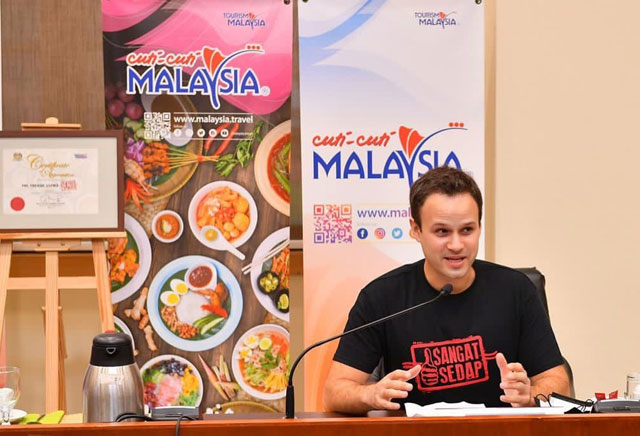 This is in line with the Ministry of Tourism, Arts and Culture’s (MOTAC) effort in revitalising Malaysia’s tourism sector. MOTAC through Tourism Malaysia has collaborated with Canadian-born food vlogger Trevor James through his social media platforms, famously known as The Food Ranger. James and his wife, Xie Chuiting, moved to Malaysia in 2019 under the Malaysia My Second Home Programme. James has been filming food and travel vlogs since March 2013 and his YouTube channel has grown to have more than 4 million subscribers today.

Trevor James and Xie Chuiting have developed a fondness towards Malaysia after visiting on numerous trips over the years and decided to move to Kuala Lumpur. He has since been promoting Malaysia as the best destination for travel in Asia to both his YouTube and Facebook followers of more than 13 million. Since his first food trip to Malaysia in 2014, James has showcased numerous attractions throughout the country and has encouraged his followers to visit for themselves and experience Malaysia’s multiculturalism, gastronomy, and scenic destinations.

Recently, Trevor James has produced a series of food exploration vlogs titled The Ultimate Malaysian Road Trip which are uploaded on his social media platform in September and October 2020. This programme involves destinations of traditional and popular local delicacies in the states of Pahang, Terengganu and Kelantan. In this collaboration, James has uploaded a series of food vlogs featuring the Malaysia Truly Asia logo, the international campaign for promoting destinations in Malaysia.

In the series, James travelled from Kuala Lumpur to Kelantan by road for a purely food-based journey, bringing viewers along to many unique locations and restaurants around Pahang, Terengganu, and Kelantan. Some highlights from the trip were Ikan Patin Tempoyak in Temerloh, Ikan Bakar Petai in Kuantan, White Laksam in the beautiful Kampung Jambu Bongkok in Terengganu, Ikan Celup Tepung, Ketupat Sotong, Satar, Nasi Kerabu, Nasi Dagang, Akok, and many more.

Dato’ Sri Hajah Nancy Shukri hopes that such collaborations will continue and more international influencers in Malaysia will be recognised. “In this era of digitalisation and social media, we hope that more international influencers will come over, like what Trevor has done, to help promote the Malaysian tourism industry. We also hope that Trevor’s work is the beginning of similar joint efforts and will open doors to more collaborations in the future.”